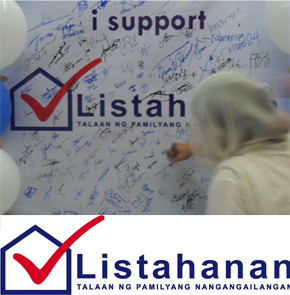 Listahanan was successfully launched in Region XII on October 17, 2013.

Spearheaded by the Department of Social Welfare and Development (DSWD) XII, the launching of the new brand name of what formerly known as National Household Targeting System for Poverty Reduction or NHTS-PR was initiated by Regional Director Bai Zorahayda T. Taha.

Taha formally announced the new official brand name of the project during her speech for the agency’s first State of the Region Address (SORA) on Social Protection.

Apart from the new brand name, new tagline “Talaan ng Pamilyang Nangangailangan” and new logo were also launched. Listahanan now as its new name is expected to reach more audience according to Taha.

“The new name is derived from two Filipino words namely listahan (list) and tahanan (house/home) thus assumingly sounds more familiar to Filipinos, we are hopeful that it will eventually find its way to becoming a household term”, Taha explained.

Accordingly, the brand as a whole balances authority/objectivity (scientific accuracy of list) with compassion (care and protection of poor) which is consistent with the image of DSWD.

She further noted that NHTS-PR has merely changed its name to Listahanan however it still aims to identify who and where the poor are.

Meanwhile, she announced for the plausible conduct of the second nationwide household assessment of Listahanan which will either be late this year or on the first quarter of 2014.

It can be recalled that the first nationwide assessment was conducted in 2009 which identified a total of 296, 043 poor households in region XII. The result of which became the basis for targeting the beneficiaries of some of DSWD’s social protection programs, Pantawid Pamilya, Social Pension, Sustainable Livelihood Program and Government Internship Program (GIP) just to name a few.

Taha urges the public and private groups, NGO’s, NGA’s and other groups to help alleviate poverty in the Philippines by using the Listahanan database as a basis for targeting the beneficiaries of their social protection services and programs.

“Going through the process of inking a Memorandum of Agreement with DSWD to obtain the Listahanan database is worth doing as it can help you find the poor people who rightfully deserves your assistance minus the trouble”, Taha encourages.

Currently, four other Government Agencies and three LGU’s have existing MOA with DSWD XII to use Listahanan database.
Meanwhile, according to Regional Information Officer, Dennis G. Domingo II, the launching of Listahanan was deliberately scheduled as the day for the SORA to ensure huge crowd participation.

“We took advantage of the number of audience during the SORA which consisted mainly of Regional Directors of different line agencies, Local Government officials, Social Welfare officers, private groups and our partner media”, Domingo noted.

Flyers, Regional Profile of the Poor booklets, tarpaulins, FAQs and briefers were among the IEC Materials distributed during the launching. Audio-Video Presentation was also looped in the big screens. Generally, the launching was conducted to increase awareness, understanding, support and utilization of the Listahanan as the basis for household targeting of social protection programs.

Finally, Taha along with the VIP’s sealed their commitment of support to the project through signing the “I support Listahanan” wall just moments after her delivery of speech. The commitment wall was covered with signatures affixed by roughly 300 supporters.(End)