ARAKAN, North Cotabato- Before a golden ray finally appeared in the sky early in the morning of Tuesday, against the extremely cold damp weather of the beautiful village of Lanao Kuran, the residents have already assembled themselves, with some have long arduous journey to the seemingly never-ending steep slopes, to the barangay proper.

The festive mood of the place greeted everyone, providing a formal hint of a celebration happening in the place for those coming in.

Lea Bilarmina, 45, could not hide her feeling of enthusiasm. She was busy accommodating her co-villagers, welcoming them with an unsolicited smile while assisting to their designated “bahay kubo” of per purok or sitio while waiting for program to start.

Indeed, Lea and the rest of the Lanao Kuran, one of the town’s hardest to reach remote communities, have the reason to celebrate that day.

Aside from the turnover of long-awaited solar street light project under the PAyapa at MAsaganang PamayaNAn (PAMANA)-the Philippine Government’s peace and development framework that aims to strengthen peacebuilding, reconstruction and development in conflict-affected and vulnerable areas- the local government of Arakan town, together with their officials, will be marching to the place, bringing all the services that Lea and the Lanao Koran villagers could barely access because of the distance of the barangay to town proper.

This initiative is called “Tambayayungay sa Barangay”. It was derived from a Visayan term, “yayung” which means to help collectively or “bayanihan” in layman’s term.

Atop the mountain, Lanao Kuran has a breathtaking scenic views and sights to behold. Along the way, the lushness of forest, the beautiful wild flowers, the songs of birds, the whisper of the cool breeze of the wind in the century old trees covered with moss, welcome new comers.

However, at the back of the shimmering bounty of nature hides the dark experiences and situation of the people-trapped in a cycle of grinding poverty.

For many years, as an outskirt village, more than 30 kilometers away from the town proper, socio-economic development is stalled due to its inaccessible road, lack of livelihood means, low educational attainment, uncooperative residents and so many other predicaments.

“Kaniadto, tatlo ka adlaw ka bag o makaabot gikan sa Arakan paadto ug pabalik diri (Lanao Kuran),” (Before, it took three days to reach the town and vice versa) Lea said, adding that aside from the distance that only in most important cases they went to town, it was also quite expensive.

In fact, some villagers, in most occasions, preferred to have their economic transactions in Calinan, Davao City in Region XI than in Arakan.

Lea has known the desperate condition in the place. Like her, many families earned barely enough to bring in three meals a day, which for many times have to skip it. Partly, blaming to the lack of government support in them.

“Murag man kami ug gipabay-an,” (It seemed that we were left behind) Lea sadly recalled.

The village history tells that the place was one of the rebel-infested communities in town. It had an unstable peace condition due to the insurgency, reducing the beautiful village of Lanao Kuran from a land of bounty to a land of despair.

From time to time, government troops and rebel group clashed, destroying the peoples live and resources, instigating again and again the effects of conflicts to the lives of the villagers.

But, the community stood as one, believing that there will be a dawning of peace and development in the place.

The local government unit of Arakan had witnessed the agony of residents. It tried to exert all efforts to answer the pressing needs of the communities. However, resources always fell short.

Thanks to the help various organizations working together with Arakan LGU. Roads were rehabilitated, with some portions being concreted, households have accessed to water and electricity, health facilities and other projects were implemented in the village.

These organizations including universities, civil society and non-government organizations, national agencies and other institutions poured assistance to the village, resulting to the slowly losing of grip of insurgency in the community.

The Department of Social Welfare and Development came in to the village, bringing the Kalahi-CIDSS regular projects including the PAMANA projects later on like bridge, training center, solar street lights and others.

Under the DSWD Programs, Lea and several Lanao Koran villagers benefit also the Pantawid Pamilya Pilipino Program, aside from the grants to finance the community projects, providing better access to basic social services, while also at the same time supporting peace-building efforts and helping addressing needs of people, including peace concerns.

The “Tambayayungay sa Barangay” is regularly done in different barangays of Arakan. It is a way of celebrating the peace and development in various villages through various activities like Kasalan sa Barangay, tree growing, operation “tuli”, skills training, medical-dental check up, issuances of animal credential, cedula, and other municipal permits, massive civil registration and many others.

To make the activity more meaningful and memorable, PAMANA Projects are usually turn over to communities during the said event, in which staff and volunteers are also part of the planning and actual conduct of activities.

Cathy Arabis, the Municipal Monitor for the project said that aside from mobilizing community volunteers in taking active roles in different activities of Tambayayungay, the ACT/MCT members are also taking initiative in conducting their own activities like feeding, distribution of school supplies to children. Furthermore, project team members also distributing leaflets and discuss some updates about the projects as a whole.

“Tambayayungay is like a festival that we are always looking forward,” Arabis said. “It means a lot to the communities because it dispels the exclusion issue and apathy towards government,” Arabis added.

For Lea, aside from the different social services and infra projects brought to their community, the empowerment of Lanao Kuran, seeing the whole community mapping together their development priorities which are addressed in a participatory, collective and inclusive decision-making process, is the main reason to celebrate peace and development.

Like this mango tree, according to her, may the community will continue to nurture it to bear fruits-to continue celebrate the peace and development in Lanao Kuran. (Hilbert Estacion, Regional Social Marketing Officer, DSWD-12) 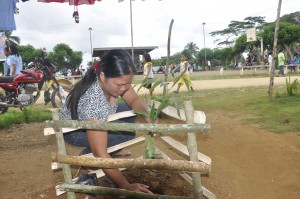