Koronadal City—The Department of Social Welfare and Development in Region-12 has won two awards in the first national search recognizing the champions of community-driven development (CDD) strategy of the agency, an official said Tuesday. 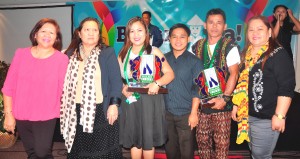 Bai Zorahayda T. Taha, DSWD-12 regional director, said that the search is dubbed as “BayanI Ka! Award”, an information campaign of the Kapit-Bisig Laban sa Kahirapan-Comprehensive and Integrated Delivery of Social Services (Kalahi-CIDSS) of the agency, which promotes the involvement stakeholders in the community development, by encouraging them to put their community (bayan) before their own selves (“I”).

“The awards seek to recognize those individuals, local government units and organizations and other stakeholders who have exemplary contributions to the realization of a genuine community-driven development,” Taha said.

Bailid, according to Taha, was recognized because of his contributions as volunteer for the Program with dedication to community and most of all, for the welfare of Indigenous Peoples who were left behind in terms of development.

The ACT of Isulan on the other hand, the Kalahi-CIDSS implementation team in the municipal level, was recognized for strengthening the awareness of the community through consultative dialogues and rigorous engagements in the community people, Taha added.

The awardees receive cash prizes and a trophy handed over by DSWD top officials.

Meanwhile, DSWD Secretary Corazon “Dinky” Soliman, in her speech during the awarding, expressed her appreciation to the awardees and various stakeholders of the Program

“We are thankful for sharing your time, talent, treasure and even tears to the Program,” Soliman said.

Soliman added, that communities should learn from the experiences of the awardees, who are now part of the pool of champions in promoting the Program, in terms of community development initiatives.

Kalahi-CIDSS, is one of the government’s flagship poverty-reduction Program, utilizing community-driven development (CDD) as a strategy, aims to empower communities to achieve improved access to services and to participate in more inclusive local planning, budgeting, and implementation.

In Region-12, it is now implemented in the 16 towns in the region in the provinces of Sultan Kudarat, Sarangani and North Cotabato. ### (Hilbert T. Estacion, Regional Social Marketing Officer, DSWD-12)