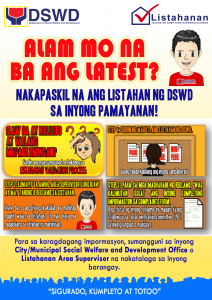 The DSWD FO XII enjoins public for active participation both for SOCCSKSARGEN and ARMM-LaMa (Lanao and Maguindanao) in scrutinizing the initial list of poor households posted by the hired Area Supervisors (AS) of the National Household Targeting Unit (NHTU).

Listahanan is now on its 3rd cycle which is known as Validation and Finalization Phase. This is done by posting the initial list of poor families at the barangay for the communities to provide feedback on the given list. A Local Validation Committee (LVC) is formed in each municipality to act and give resolutions to all complaints and grievances. Families who were not visited/assessed during the mass enumeration are given a period of time to appeal and be assessed. Information Education and Communication (IEC) materials like tarpaulins and posters were also disseminated in support of the event.

With this, the individuals and/or groups are given 15 days to file complaints, grievances and if there are any corrections with the initial list of poor households posted in conspicuous places.

Mr. Maslama B. Hassan, Regional Field Coordinator (RFC) of SOCCSKSARGEN and Ms. Aminah P. Macodi, RFC of ARMM-LaMa said that “Field Office XII hired one hundred eighty two (182) Area Supervisors (AS) which are now deployed in the field to receive all types of complaints. Of this number of field staff, 100 AS for SOCCSKSARGEN, 42 AS for Lanao del Sur and 40 AS for Maguindanao.”

All queries, complaints and appeals shall be facilitated and accommodated by the assigned Area Supervisors of Listahanan in the barangay hall. Consolidated types of complaints shall be forwarded to the members of Local Verification Committee (LVC) for deliberation and resolution within the period of 15 days.

“all Local Government Units are encouraged to support the project by allowing DSWD field staff to conduct assessment in your respective areas, assist them in identifying pockets of poverty, and participate as part of the Local Verification Committee (LVC).

The LVC shall be responsible for the resolution of all complaints and/or appeals brought by individuals and/or groups. It shall be composed of five (5) members. The City/Municipal Social Welfare and Development Officer (C/MSWDO) and the City/Municipal Planning and Development Officer (C/MPDO) shall be the mandatory members while the three (3) other members shall be identified/chosen by the local chief executive. The other three (3) members may be picked from among the members of non-government organizations (NGOs), faith-based groups, people’s organizations (POs) and of the civil society groups in the LGU concerned.”

Based on the guidelines, RFC’s enumerates all types of complaints that individuals and/or groups can brought about:

Bai Zorahayda Tanggol Taha, Regional Director of DSWD FO XII, during the series of LVC orientations and trainings of field staff, said “after the validation and finalization phase, the initial list of poor families may or may not be changed depending on the greatness of complaints received, re-assessment and re-application of Proxy Means Test.”

Once the validation and finalization is completed, the official list of poor families shall be generated and shared with data users to serve as their basis in identifying potential beneficiaries of social protection programs and services.

Listahanan, also known as the National Household Targeting System for Poverty Reduction (NHTS-PR), is an information management system that identifies who and where the poor are nationwide. Consistent with the Executive Order 867 series of 2010: “Adoption of the Targeting System as the Mechanism for Identifying Poor Households who shall be Recipients of Social Protection Programs Nationwide.”