Menu
GOVPH
Posted on May 1, 2017 by Dennis Domingo

Villamonte is located in the northeastern part of town, which is 42 kilometers away from the town proper and considered as the farthest and hardest-to-reach village among 27 barangays of Lebak.

Agitating the situation of Candado and the rest of the villagers of Villamonte, is the fact that they need a huge amount for vehicle rental in order to bring a person who needs immediate medical care to the nearest hospital, ranging from P6, 000.00 to P7, 000.00.

The struggles of Villamonte’s villagers will soon to be thing in the past after their proposed one unit rescue vehicle with amenities amounting to P P1.35 million has been chosen as one of prioritized projects during the town’s recent municipal inter-barangay forum (MIBF) conducted under DSWD-Kalahi-CIDSS Program in towns of Lebak and Kalamansig, Sultan Kudarat.

MIBF is a prioritization process employed by DSWD Kalahi-CIDSS in which instead of local officials that determine which villages will avail the funds and projects; it is given in the hands of ordinary people of barangays.

Other community projects that will be funded under the Program in Lebak town include garbage compactor truck (P.62 million) of Poblacion III, T-breakwater (P4.24 million) of Tibpuan, health centers of Christiannuevo (P1.2 million) and Bolebak (P1.57 million) and an evacuation center (P1.87 million) Barurao-1.

Pearly Santillana, the town’s area coordinator said that these projects, which are in far-flung communities , are considered to be most pressing needs with the total amount of P20.65 million.

“We hope that these projects to address the struggles of villagers and be the vehicles to access other government services and programs,” Santillana said.

Meanwhile, Genelyn Concemino, the town’s program area coordinator in Kalamansig said that some P18.85 million of community projects will be benefited by 11 villages under DSWD Kalahi-CIDSS Program.

Concemino said that villagers of Santa Maria will soon have training center with amenities (P2.10 million), a rescue vehicle with amenities (P1.34 million) for Hinalaan, while darkness will soon to be thing in the past for villagers of Obial and Cadiz with solar street lights amounting to P1.69 million and P1.68 million, respectively.

Concemino added that villagers of Nalilidan and Santa Clara will have potable water system amounting to P1.44 million and 1.30 million, respectively.

Kalahi-CIDSS, which stands for Kapit-Bisig Laban sa Kahirapan-A Comprehensive and Integrated Delivery of Social Services, is a national community-driven development program of DSWD in partnership with the local government units.

The program aims to bring together different stakeholders so that grassroots communities work cohesively and transparently to move toward progress, leaving no one behind in terms of development.

Like in Candado village, their long-awaited rescue vehicle has finally come into reality. At the least, he hopes that no more father to feel the excruciating pain he experienced because of the absence or lack of government project to help them. (Hilbert T. Estacion, regional social marketing officer, DSWD 12) 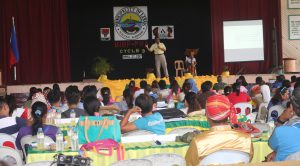