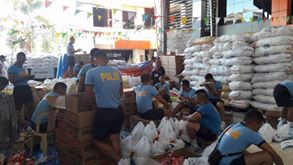 #MarawiClash – Many of families were affected in Marawi City siege which resulted to the mass number of internally displaced persons (IDPs). The Department of Social Welfare and Development prepared an augmentation plan to ease the plight of the affected families.

Bai Zorahayda T. Taha, DSWD FOXII Regional Director said “Field Office XII has a prepositioned stockpile of 30,000 family food packs at Php 410.00 per pack amounting to Php 12,300,000 and 3 million standby funds and is available at any given time”.

DSWD Central Office also released additional funds to FOXII for replenishment of stockpiles amounting to Php 8,200,000 to ensure that the region has sufficient funds for augmentation to LGUs in Region XII and ARMM areas affected by disaster both Natural and Man-made. ###