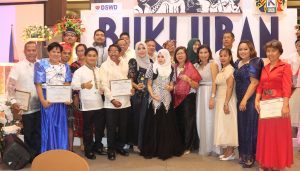 Bayani Ka! Awards is an annual search for the outstanding community volunteers who are considered as unsung heroes for their extraordinary contributions and dedication to the development of their communities through the country’s community-driven development program, Kalahi-CIDSS.

Among this year’s winners include Mr. Bautista Agbay, 64, a farmer from Barangay Mabay, Maitum, Sarangani Province who was hailed as Best Community Volunteer for Peace Promotion Award in recognition of his volunteerism works as chair of barangay subproject management committee, rekindled the “bayanihan system” in the implementation of 96 units of housing project in the village, benefiting poorest among the poor families living in a disaster-prone coastal areas like storm surge and flashfloods.

“Peace is not just about the absence of war. It’s about sleeping inside your home with feeling safe and secure. It’s about having good relation with your neighbor. It’s about living with dignity.” Agbay said.

Mr. Mandiala was hailed for being a role model, despite of those painful descrimination he experienced in life as PWD, channelling them into opportunity to prove his worth. He has inspired villagers to volunteer in various development initiatives in barangay, to be actors, rather than audience of development.

The efforts of Ma. Lolita Ruben, 56, of Barangay San, Miguel, Arakan, as volunteer in advocating the protection of environment was left unnoticed after she was hailed as Kalahi-CIDSS Best Community Volunteer for Environmental Protection Category.

Mrs. Ruben, as barangay kagawad, is a great instrument Barangay San Miguel for being one of the most prolific barangays in terms of number of resolutions and ordinances passed related to environment protection in the municipality of Arakan.

On the otherhand, the village of Tambilil in Kiamba, Sarangani Province was declared as this year’s Best Barangay Local Government Unit for Tambilil for empowering ordinary citizens through direct participation in local governance by allowing them to identify their own community needs, as well as plan, develop, implement, manage, and sustain projects together to address local poverty issues in a transparent, participative manner while inculcating accountability.

Gemma N. Rivera, DSWD 12 said that Bayani Ka! Awards is an expression of gratitude of the agency to the community volunteers of the program for their contributions in addressing the local problems.
“Our volunteers are the lifelblood of the Program. They our local heroes that are offering their time, talent and treasure without expecting in return,” Rivera said.

Each winner received a development incentive amounting to P30, 000.00 to fund their chosen project in their respective villages.