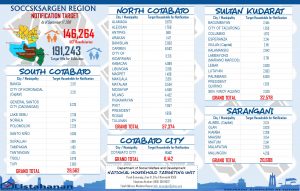 SOCCSKSARGEN – Department of Social Welfare and Development Field Office 12 through the Listahanan or National Household Targeting System for Poverty Reduction (NHTS-PR) is now preparing for the upcoming notification activity of the Unconditional Cash Transfer (UCT) Program.

“To date, a total of 146,264 Listahanan identified poor households will be notified through house-to-house visit starting next month as beneficiaries of the UCT Program,” Director Bai Zorahayda T. Taha said.

All the funds for UCT grants are lodged with the Land Bank of the Philippines.  As a result, prior to the implementation of the UCT payouts, DSWD FO 12 officials had a meeting with the Land Bank Managers regarding the different payment methods available and suitable for all the UCT beneficiaries such as the active beneficiaries of Pantawid Pamilyang Pilipino Program, the indigent Social Pensioners of Social Pension Program, and the Listahanan identified poor households. – Director Taha ended.