Menu
GOVPH
Posted on October 20, 2021 by Audrey Amarante
SULTAN KUDARAT (October 6) — Deep in the mountains of this province in the restive south, hundreds of men have been seduced for years by false promises once they join the resistance group.
Often, their recruiters would convince the life of their family and loved ones will improve if they are connected and extending support to the New Peoples Army – the armed wing of the Communist Party of the Philippines (CPP) considered as Asia’s longest-running insurgencies.
Among them was Roger Suklangit who grew up on a farm surrounded by violence in the village of Mitungok in the township of Senator Ninoy Aquino.
Life in rural, according to Suklangit, was hard. He says his parents put him to work on a small farm at a young age to put food on the table.
“Due to the hardships of life and insufficient sources of livelihood, I was persuaded by my people in our community to join a rebel organization in exchange for a good life for the family,” said Suklangit, in his 40s, a father to two children “My recruiters told me I should go with them since we can have a beautiful life…lots of weapons, food, and money,” Suklangit recalls.
However, after a few years, he decided to give up leave their organization, citing he felt fear and apprehension for the family.
The on and off intensified crackdown by state security forces against their group in the mountains of Sultan Kudarat became a turning point for him to return to the folds of the law in 2016
The Suklangit was included in the Pantawid Pamilyang Pilipino Program in 2009 but he did not see then the importance of education, a weakness that made him decide to join the rebellion.
“I believe that my family’s life will be more peaceful if I chose the right path,” Suklangit said.
As soon as he surrender, the military, police, and local officials in the town accepted Suklangit, and assistance from the central government poured just like flawing water.
Local officials also extended financial aid worth P15, 000.00 and included them in the lists of housing program recipients of the National Housing Authority
“It’s not too late for everything to change. Now, we continue to strive in reaching our dreams. I want my children to get a degree in collge,” Suklangit said.
Restituto Macuto, DSWD regional director, said the agency is a member of the National Task Force on Ending Local Armed Conflict (NTF-ELCAC), a government program under Executive Order No. 70 where former rebels and their families, as well as individuals and families affected by armed conflict who have been referred to DSWD, shall be provided with interventions that would address their immediate needs.
These interventions include temporary shelter, appropriate assistance under the Assistance to Individuals in Crisis Situations (AICS), and the provision of protective services, such as house rental assistance, psychosocial counseling, food packages, and hygiene and sleeping kits.
Macuto said former rebels will be assessed to ensure the provision of “most appropriate” programs and services to be extended to them. Services that may be extended to the former rebels possible inclusion in the 4Ps, provision of livelihood assistance under the SLP, and Cash-for-Work (CFW) Program, among others. (JBM / DSWD) 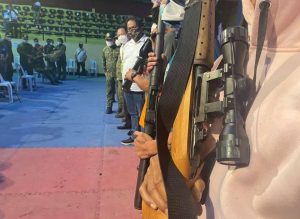